I remember my dad this Memorial Day

My dad passed away seven years ago after complications from Agent Orange which he was exposed to in Vietnam. The government said he died as a result of the Vietnam War, and he suffered so much after the war.

He saw things that no one should see. Years after, he started opening up and sharing his experiences with me and my brother.

PTSD got to him before Agent Orange. He would wake up in the middle of the night sweating, in a panic. He would make sure everyone in our family was safe. We found out years later that a Vietnam orphanage that he helped build was destroyed after he got back home. These were kids that he played with and cared about deeply. The destruction of the orphanage was something he never could get over.

When we would go out to eat my dad had to position himself so he could see everyone in the room. We found out years later that he and his men were attacked by surprise a number of times. My dad would get angry really quickly and spend days feeling bad and apologizing. Just hearing the stories of his experiences years later made it all clear to me why he did.

Part of me wants to honor my dad on Memorial Day. He is gone because of the war. There is something that holds me back, though: my dad. When my dad was dying I asked him if he thought that he should be on the Wall in D.C. -- one that he would take us to see so many times. His response surprised me. He said, “No! That is for the men and women who didn't come back. I never thought that I would get married and have kids when I was in Vietnam. I got to come home. My friends and many others didn't. So many never came back."

My dad never complained about his service and his sacrifice, despite all the things that it did to him. There were friends that didn't talk to him when he came back from Vietnam because he went. He was called names that I would rather not say. A taxi driver got upset with him after picking him up from National Airport when he arrived back in town. Sadly, this was his “welcome home” experience.

Every day of the year I think of my dad. On this Memorial Day, because of the example my dad set for me, I honor the men and women who never got to come home. 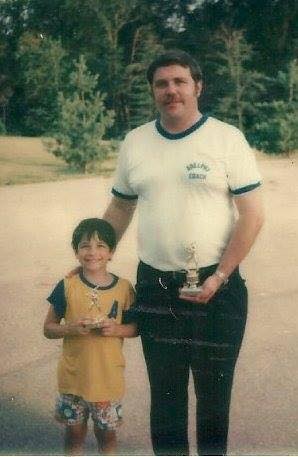